Assessing the course of the Chadian peace agreement in Doha

A state of anticipation prevails in Chadian headquarters after the rebel groups and the Chadian Military Council announced, in talks in the Qatari capital, Doha, on August 8, that they agreed to sign a peace agreement in order to pave the way for holding a national dialogue between the whole conflicting parties.

The announcement of the signing of the peace agreement came after unremitting efforts made by the State of Qatar to bring the Chadian parties closer. In fact, the main trigger that facilited the proccess was that 19 armed groups out of 52 ones, opposing the ruling military council in Chad, agreed to return to the the path of negotiation.

These groups had earlier suspended their participation in the negotiations on July 16, due to accusing the Military Council, led by Mahamat Idriss Déby Itno, also known as Mahamat Kaka, of wagging a campaign of disinformation and intimidation during the talks that started on March 13.

Not many details were revealed about the contents of the agreement, but Chadian official statements said that the agreement included the Chadian Military Council's pledge to stop all military operations against the signatory groups, considering a clause obligating the parties to cease fire.

It was also agreed to launch a national dialogue in the capital, N'Djamena, by August 20, which will be attended by about 1,500 representatives of the signatory armed groups. Some sources reported that they are 30 armed ones who signed in. According to the text of the agreement, it aims at setting a date for the upcoming elections and building a solid ground in order to preserve ceasefire agreement.

The demands of the organizations participating in the negotiations are many and varied, given the diversity of the opposition organizations participating in the Doha talks. There are also several disputes between the leaders of these groups, as there are opposition organizations that did not accept to sign the agreement. The most important disputes of which is the Front for Change and Concord in Chad (FACT). This Front clashed with former President Idriss Deby-led military council, which led the Prisedent to get injuries, that led to his death last year.

The Front justified its position that the peace agreement did not succeed in taking its demands into consideration, especially the treatment of all partners as equals in the national dialogue. It also calls for the necessity of preventing Gen. Mahamat Deby from running in the presidential elections. FACT is also pressing for the release of 400 of its fighters who were arrested by Deby-led government. At the same time, it declared its openness to further dialogue.

In this regard, Qatari Foreign Minister, Sheikh Mohammed bin Abdulrahman Al Thani expressed on August 8 his hope that other groups would join the path of reconciliation and peace, with the aim of achieving the aspirations and dreams of the Chadian people.

The Military Council seeks, through dialogue with the opposition, to focus on several points, the most important of which is the integration of the fighters of the armed opposition groups after their disarmament into the formations of the Chadian Army according to the Military Council's views, which it says that they are in the interest of the country. In addition to that, the legislative and presidential elections are scheduled to take place on the basis of the progress made in the process of the comprehensive national dialogue to be held in the Chadian capital.

In any way, the efforts made by Qatar as a mediator were pivotal in guiding the possible paths of the turbulent Chadian scene. In fact, the signing of the peace agreement, although it did not include all the opposition factions, is a positive sign that reflects the parties’ desire to reach a solution.

However, the foregoing does not mean that all difficulties and obstacles facing building on the peace agreement have been overcome. One of the most important obstacles is that the opposition, after being able to kill former President Idriss Deby, has taken the initiative in the country, and is able to impose part of its vision by force. Therefore, it is expected that during the dialogue in the capital, N'Djamena, the opposition groups will resort to a policy of maximizing their demands.

Moreover, the Mahamat Deby-led Military Council, and for personal considerations, views the armed groups as the ones who caused the death of Deby's father, and therefore power should not be handed over to them without ensuring that the Military Council has the upper hand in the country. This is reflected when the Council’s delegation in Doha insisted on the disarmament and integration of opposition fighters into the Chadian armed forces.

It is expected that the constructive mediation role played by the State of Qatar is not over yet, and it will include continuing to bring views together during the National Dialogue in N'Djamena. Furthermore, Qatar might work on bringing the armed factions that refused to sign the peace agreement (in some way) to participate in the upcoming national dialogue.

The best option may be to implement the Juba Agreement scenario for peace in Sudan, as it was several agreements signed by the Sudanese authorities with the armed movements separately. This may be applied while maintaining the broad outlines and taking into account differing details in proportion to the demands of each opposition group.

In any case, the final outcome of the peace process in Chad - although it is not yet clear - will most likely lead to a re-sorting proccess of the opposition factions, even though for each other. This will also lead the military council to take further steps to build trust with these factions. Consequently, the transitional phase will take a time span of more than 18 months, set by the Military Council since last April 2021. 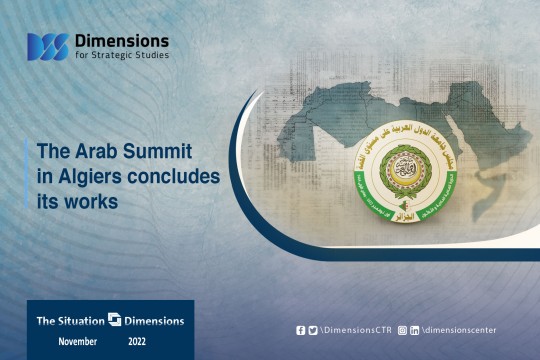